skip to main | skip to sidebar

One of my favourite (though rather labour intensive) things to make is gnocchi...those soft Italian pillows comprised of potato, flour and egg. Cheap, filling and delicious, they are the perfect food for a cold winter's night, especially when paired with red wine. In this instance, red wine was not only served in glasses, but was an integral part of the sauce, used to caramelize onions, its flavours intensified as the sugars cooked down. 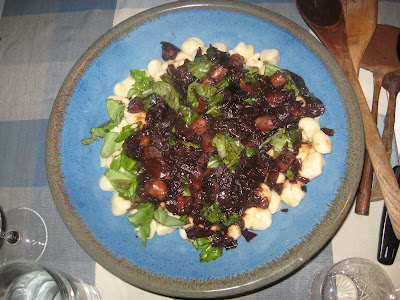 When I make gnocchi, I do not use a recipe. To me, it's all about texture. Boil a few potatoes, then mash them down. You should try to bring out the starch as much as possible. Then add one or two eggs, depending on how many people you're serving, and enough flour to make the dough non-sticky and workable with the hands. Once this is done, create longish ropes out of the dough and start cutting pieces off. If you're picky about shape, you can roll these individual pieces in the palm of your hand. If you're even pickier, you can use a fork to make press marks.

For the sauce, I caramelized quite a few onions, cooking them at a high temperature, adding wine and water in small dollops, then bringing the temperature down in order to slowly finish them off. To finish the sauce off, I added roasted garlic, fresh basil and Italian sausage, though the latter is definitely optional. I often make a similar, vegetarian, recipe with cheese instead of sausage. Things like roasted bell peppers can also be delicious. Sprinkle with Parmigiano-Reggiano to finish it off.
Posted by Ellen at 1:22 PM No comments:

I am lucky enough to have grown up in Greek neighbourhood here in Vancouver. Once a year, Broadway, the neighbourhood's main artery, is shut down for the appropriately named "Greek Day", a street festival where gustation is where it's at. 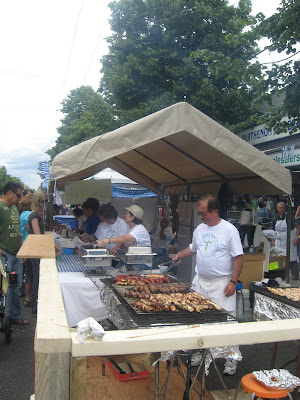 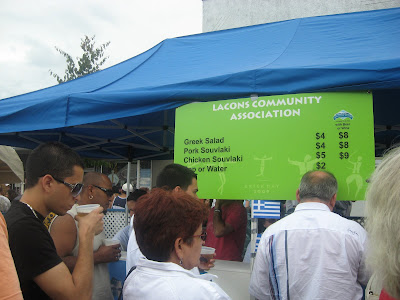 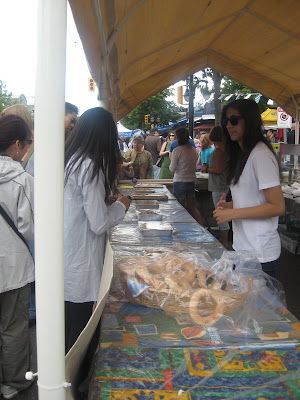 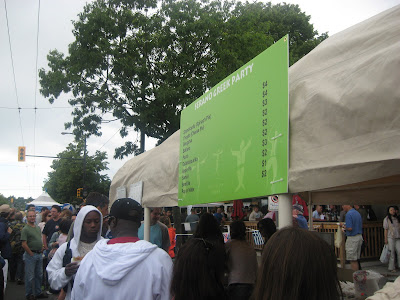 I bought some baclava here. A little too honey drenched for my tastes, but still delicious. I wish I had taken a picture of the loukoumades my brother ate, because they were beautiful.
Posted by Ellen at 12:25 PM No comments:

My family is completely secular, however we'll take any opportunity to celebrate the holidays. For us, Easter is about many things, from the lamb (deriving from the Jewish Passover tradition), to the hot cross buns (deriving from the last residual traces of Anglo Canada) to the chocolatey explosion of eggs and treats which we can thank our pagan ancestors for. My family is ecumenical - if it allows for better eating, than why not celebrate it!

Based on the latter, I have prepared two desserts for tonight's dinner - a chocolate raspberry cake, and a french lemon tart. 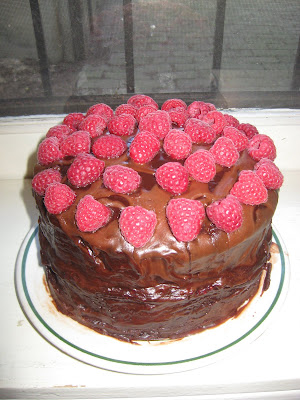 The cake is a basic devil's food cake recipe using unsweetened Ghirardelli chocolate. Between the layers is a raspberry filling. To make this filling I cooked frozen raspberries with some sugar and corn starch, then allowed it to cool and thicken. I also put this raspberry filling on top of the cake, then covered it with my take on a quick chocolate ganache. Butter + chocolate + icing suger + warm milk, boiled for a bit, then cooled in ice water (but be careful! I managed to break the glass in my bowl doing this. Make sure you wait a minute or so, or transfer the chocolate to another dish before placing your bowl over ice water!). Then I whipped the ganache over the ice water and poured it in several layers over the cake. For the last layer I added a splash of almond, some icing sugar and some more butter to make a lighter coloured topping that would add some contrast. The final addition was fresh raspberries on top. 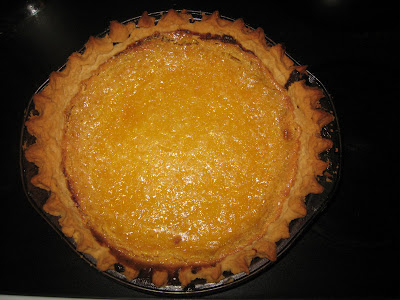 The lemon tart is based on a Ramsay recipe for Lemon Meringue Pie. Instead of a cornstarch filling, he suggested a French custard style one, so I used egg yolks as a thickener. I suppose an eggy filling is more appropriate for Easter anyway! The crust is a simple Pâte Brisée.
Posted by Ellen at 3:30 PM 1 comment:

I love southeast Asian flavours. Coming from the meeting place of so many great food cultures, they give you the rich curries and spice hit of India, the umami explosion of China, and the combination of coconut milk, limes and lemongrass that could exist nowhere else. I hope to go there on day, but until then, I'll just have to be content with restaurant takeout and my own attempts at replication. 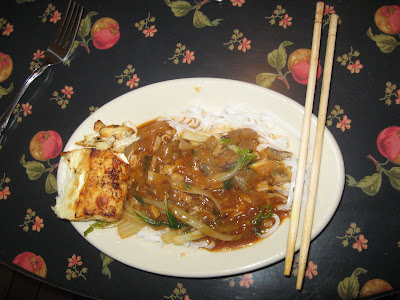 This recipe is very simple. I marinated the halibut in some lime, garlic, and chili pepper, and broiled it. Barbeque would be great as well, but it's still too early for that here! The seasoning was nice, adding some flavour, but not masking the wonderful halibut taste.

For the noodles, I fried red curry paste, onion, garlic and mushrooms together. After a few minutes, I added some coconut milk (but not so much that it became a very saucy curry), soy, a taste of brown sugar, and some lime. I reduced the sauce, then threw in some chopped bok choy, making sure not to cook in for so long. Then I threw in some chopped cilantro and served all of this over noodles. 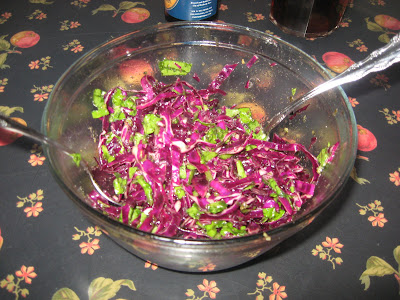 On the side I made a slaw with red cabbage. It's essentially just red cabbage with some onion, carrot, squeeze lime, garlic, mint and basil. Usually I add cilantro, but I had run out, so I used arugula instead. Obviously a very different flavour, but delicious nonetheless! A light and delicious meal!
Posted by Ellen at 2:43 PM No comments:

It was birthday time at the dog park, so I decided to make something to celebrate. Inspired by the "Ace of Cakes", and yet possessing less cake prowess, I decided to create a giant dog cookie! 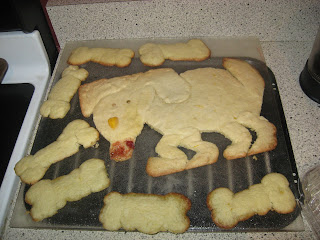 Needless to say, everyone, including the dogs enjoyed themselves (though they didn't eat any, thankfully!) 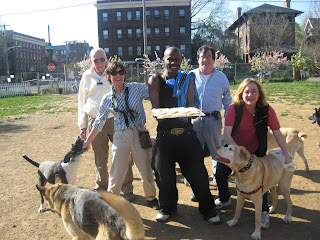 Amsterdam is a city known for its coffee shops, but when I went there, I spent most of my time in cafés. After long wet walks along the canals, there was nothing greater than finding shelter from the rain in coffee, pastry, and lots and lots of Dutch savories. Usually, when I don't know what to order, I pick the strangest looking thing on the menu. In Amsterdam, at Café de Prins, I chose Osseworst, a cold smoked beef sausage long associated with the city's Jewish community. Of course, since the menu was written entirely in Dutch, I had no idea of this when I ordered it! When my Osseworst sandwich arrived, all I could think was: Raw meat. 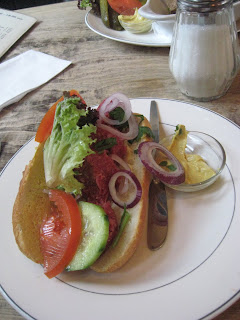 It was delicious though! My Amsterdam food adventure had begun. 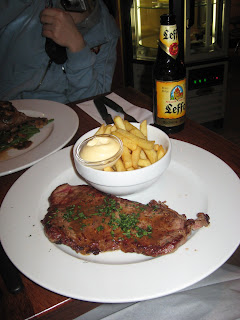 As you can see, vegetables were not a priority on this trip (well, unless you count potato). It's not that I don't like vegetables, but this is northern Europe, come on!

Stop 3. Albert Cuypmarkt. Located in the southern part of the city, in a neighbourhood where Dutch, Indonesian and Surinamese cultures come together. 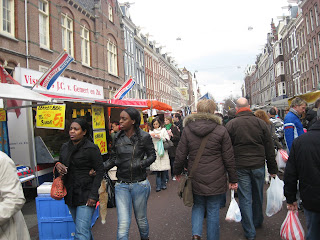 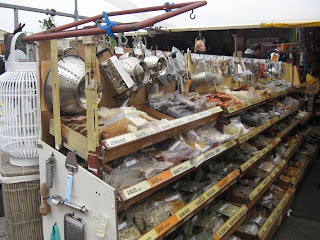 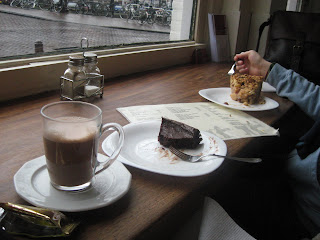 Is there anything more wonderful than drinking hot chocolate and watching the world go by? Especially when you're in a café with Bert and Ernie in it? 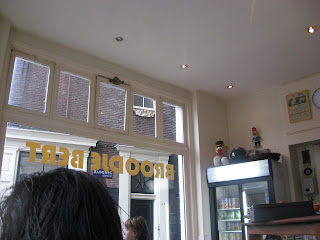 Oh, I forgot to mention. In Amsterdam, food always tastes better when dressed as Sherlock Holmes. 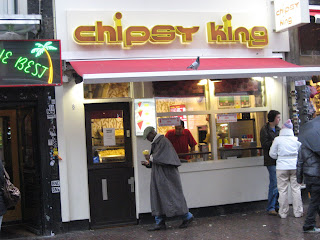 Last year, when I was studying in London, I took a day trip to Hampton Court Palace where they have a running Tudor kitchen. 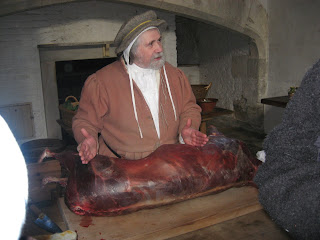 This being England in November, the menu was dominated by heavy meat and winter vegetables. And yet, as you can see in the following picture, some hints of the exotic have made their way onto the table: rosemary and sage. 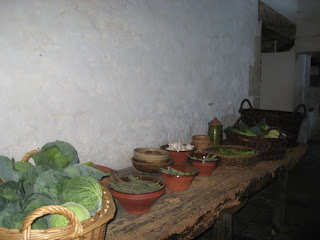 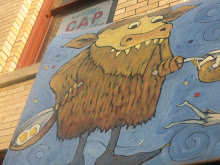 Ellen
This is the diary of an urban explorer and food hound.

other sites of interest